Dr. David SMITH, President of the Class of 5T4, shares some good news about a classmate:

Dr. Reg PERKIN, was inducted into Mississauga, Ontario’s, Walk of Fame in November. At the City Hall ceremony, Reg joined its Legends Row, which now has a plaque describing his career. After two years of postgraduate training, Reg established a family practice in Mississauga that developed into a group practice with nine family doctors. He also served as the MAA’s President in 1965 and 1966. In 1969, Reg became the first Chair of U of T’s Department of Family and Community Medicine; he taught students and residents until the mid-1980s. From 1981 to 1982, Reg was President of the College of Family Physicians of Canada and from 1985 to 1996, its Executive Director. Now 91, he has been retired for 25 years.

Dr. Harry  HALL  retired five years ago. Recently, he did some public speaking, a task that used to terrify him. He has written a book, Doctor Harry, about his life as a rural family physician who also did locums in the Arctic, northern Ontario, northern British Columbia, New Zealand, and Australia. In his book, Harry includes tales from his travels to over 70 countries.

Dr. William CRYSDALE is involved with charity golf tournaments to benefit Parkinson Canada. The 2017, 2018, and 2019 tournaments were at Mad River Golf Club in Creemore, Ontario. Due to the pandemic, the 2020 tournament was virtual. But the 2021 golf tournament, which his son Rob organized, was at Duntroon Highlands, also in Creemore. Over the past five years, the tournaments have raised about $170,000.

Dr. Stan LITCH made a CD as his “COVID-19 lockdown-isolation project.” Recently finished, the CD is called “Play It Again, Stan.” “It’s a ukulele ramble down Tin Pan Alley,” says Stan. “I’m glad I don’t have to fund my retirement from the CD sales.”

Dr. Linda RAPSON was awarded the 2021 Dr. Rogers Prize, which highlights the contributions of complementary and alternative medicine to health care. She shares the $250,000 prize with Professor Emeritus Gregor Reid at Western University. Inspired to study acupuncture after it relieved her mother-in-law’s severe, chronic neck pain, Linda was one of the first physicians in Canada to study acupuncture. Linda opened the Rapson Pain and Acupuncture Clinic in Toronto in 1979, where Linda, the Medical Director, and her staff treat chronic pain by integrating acupuncture and nutrition with conventional medical approaches. She is thrilled that acupuncture has gone from being “almost quackery to being considered mainstream by a lot of physicians.”
Photo credit: Rachel Manning

Dr. Vladimir HACHINSKI is researching cost-effective dementia-prevention models with an international team of 25 investigators. “We know that environment, socioeconomic factors, access to medical care, individual risk, and protective factors play a role in stroke and dementia risk,” he says. “This project is unique in that no one has ever attempted to look at all relevant factors associated with dementia prevention at once.” Vladimir is a professor of clinical neurological sciences at Western University.

Dr. Donald NIECE is “long retired” after 40 years of general and hospital practice in Brampton, Ontario. Don and Bev are celebrating their 50th wedding anniversary. They have two grown children and four grandsons.

Dr. Samuel J. LANGER writes that he is “still chugging along.” Sam is the Medical Director of Beacon Health Options and in private practice in Manhattan, New York City. Sam and his wife are celebrating their 50th wedding anniversary. They have four grown sons and seven grandchildren.

Dr. D. Ross MACLEOD, after four years in family medicine, four years of a pediatric residency, and two years of teaching, moved to Alabama and Georgia where he practised pediatrics for 41 years. Now retired, he says that travel, photography, and wine making will consume his future years.

Dr. Nicholas RUDDOCK announces that his third novel, Last Hummingbird West of Chile, is “out in the world now.” Listen to a passage from the book.

Dr. George BORIS has practised in Los Angeles for 46 years. He is now semi-retired but has three board-certified plastic surgeons working for him. George reports that he is “spending a great deal of time travelling and living in Miami.”

Dr. Sharon BALTMAN has released her first novel, Anne of Oasis. She describes it as “a fictional tale of an eccentric, depressed, 70-year-old Toronto woman who is hanging on by her fingernails. In desperation, she seeks talk therapy, embarks on a quirky journey, and finds bliss.” In Toronto, the paperback is available at Caversham Booksellers and select Book City locations. She writes that you can also order it “from your favourite local bookstore, along with the e-book online. You can also request it at your local library.” Here is Sharon’s website.

Dr. Mel BORINS has published his fifth book: Bali – A Great Place to Visit. It’s about Mel’s journeys to the Indonesian island and why a visit is highly recommended. On Amazon, you can order a Kindle or print version here.

Dr. Larry HANCOCK is retired but keeping busy with fly-fishing, hiking, and skiing in the Kelowna, British Columbia, area. As well, he’s doing woodworking projects around the house. “Travel has fallen off with COVID,” he writes, “but new trips are being planned.”

Dr. Helena JACZEK was re-elected as the member of Parliament for Markham-Stouffville on September 20, 2021. A few weeks later, Prime Minister Justin Trudeau promoted her to cabinet as the Minister Responsible for the Federal Economic Development Agency for Southern Ontario. Previously, Helena was the Ontario Minister of Community and Social Services, and Minister of Health and Long-Term Care. For many years, Helena was the Commissioner of Health Services and the Medical Officer of Health for York Region, Ontario.

Dr. Alan MONKHOUSE retired from his family practice in Cambridge, Ontario, nearly four years ago. Now living in Waterloo, Ontario, Alan looks forward to the easing of travel restrictions so he can visit his “widely scattered family in British Columbia, Australia, and the Caribbean.” Contact: akmonkhouse@icloud.com

Dr. Marshall KORENBLUM, after 23 years as Psychiatrist-in-Chief/Medical Director of the Garry Hurvitz Centre for Community Mental Health (formerly the Hincks-Dellcrest Centre), is stepping down on March 31, 2022. He will be transitioning to other roles at the centre on a half-time basis, and will continue as a consultant to the Division of Youth Psychiatry at Sunnybrook Health Sciences Centre, Jewish Family and Child Service, and various schools and school boards. Marshall is looking forward to devoting more time to his six grandchildren and hobbies.

Dr. Peter TINITS is retiring from the practice of anesthesia on December 31, 2021. He plans to continue serving as a coroner to gain fodder for more books to follow his novel A Cause and Manner. Contact: ptinits@gmail.com

Dr. Małgorzata NOWACZYK has written a book about her medical training and practice, Chasing Zebras: A Memoir of Genetics, Mental Health & Writing. “The most important part of my memoir is the need for openness and vulnerability in medicine training and practice,” writes Marg, a pediatric clinical geneticist and professor at McMaster University. To pre-order her book, click here here.

Dr. Warren Y. K. NG assumed the position of President of the American Academy of Child and Adolescent Psychiatry on November 1, 2021.

Dr. Timothy KAM reports that there are now five members of the Class of 9T3 practising in Vancouver. “We used to do gatherings every few months,” says Tim, “but were interrupted by the pandemic.” This photo shows the five classmates at their first gathering since COVID-19 arrived in Canada.

Dr. David KAPLAN has been appointed Vice-President, Quality at Ontario Health, which oversees much of the administration of the Ontario health care system. Previously, David was the Chief of Clinical Quality at Health Quality Ontario. He is also an associate professor in the Department of Family and Community Medicine at the Temerty Faculty of Medicine. 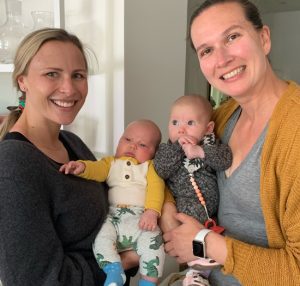 Drs Jillian BARDSLEY and Shawn CHHABRA met in 2011 at their medical school interview. They are expecting their third child in March. “Big brother and sister, Rohan and Anika, are very excited,” writes Jillian. “Rohan is turning five and excited to get his coronavirus ‘needles’ because he will be able to stay healthy and protect the new baby. We started the public health indoctrination young!”

Drs Deborah KOH and Anath Lionel, both from the Class of 1T8, are engaged. Deborah writes, “Anath and I are beyond excited to share news of our engagement! Here’s to hoping for a COVID-free wedding!”

The Class of 6T2 is planning an in-person luncheon to mark its 60th anniversary. The celebration will be on Friday, May 6, 2022, at 12:30 at the Rosedale Golf Club. Emails to save the date have been sent out. Please indicate if you are planning to attend by January 14, 2022. You can RSVP online. For more information, email Dr. Fred Rosen at fishl.rosen@gmail.com

The Class of 6T7 is hoping to have an in-person reunion in June 2022 at the Donalda Club.

The Class of 7T2 is looking for classmates interested in getting the ball rolling for a 50th reunion. If you’re interested, email  the MAA.

If you are planning a reunion and need help contact the MAA.

Email your class news and photos to the MAA  by March 1, 2022 for the next issue. Digital submissions preferred, or send submissions by mail to: MAA Matters, Medical Alumni Association, 1 King's College Circle, MSB Rm 3249, Toronto ON M5S 1A8. Mailed photos will be returned if requested.