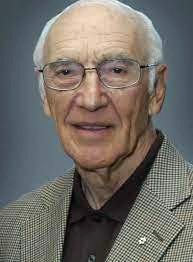 My father, Bernard (Bernie) Langer, was the youngest son of Joe and Pearl Langer, who immigrated to Canada from Poland in 1910 to escape persecution and pogroms. He attended high school at Harbord Collegiate in Toronto and was accepted into U of T’s medical school despite the strict quotas on Jewish students that existed at the time.

In medical school, Bernie was the gold medallist and President of his class. At the same time, he served as Captain of the Medical School Swim and Water Polo teams. He also found time to meet and marry Ryna (herself the valedictorian of her high school class) who remained his partner, confidant, and advisor for 68 wonderful years.

Bernie did his general surgery training at U of T and ultimately accepted a staff position at Toronto General Hospital, the first time that a Jewish surgeon was hired at that institution. Prior to starting his practice, Bernie did a fellowship in surgical oncology at the MD Anderson Cancer Center in Houston and in surgical metabolism with the iconic Dr. Francis D. Moore at Harvard. When he returned to Toronto, he established a research program in canine liver transplantation, a field that at the time was in its infancy.

Initially, Bernie did the full range of general surgery, but over time he focused on the field of hepatobiliary and pancreatic surgery. He developed a reputation for clinical and technical excellence and was the “surgeon’s surgeon.” He did the first liver transplant in Toronto, and I had the honour of being third assistant to him and Dr. Rick Superina on the first liver transplant at SickKids when I was a pediatric surgery fellow.

As Chief of General Surgery at U of T, he pioneered subspecialty training and the recruitment of colorectal, vascular, oncologic, and hepato-pancreato-biliary surgeons. As Chair of U of T’s Department of Surgery, he instituted an innovative practice plan that supported and encouraged research and teaching within the department. He established the Surgeon-Scientist Program, which has been emulated by surgical and non-surgical departments around the world.

After stopping clinical practice, Bernie served as President of the Royal College of Physicians and Surgeons of Canada. With Cancer Care Ontario, he was responsible for regionalizing complex surgical oncology in the province. Among his many awards, he was named to the Order of Canada in 2002 and inducted into the Canadian Medical Hall of Fame in 2015.

Bernie was an accomplished fly fisherman who loved to be on the water with his closest friends and family. Some of my fondest memories are of fishing with him for Arctic char, salmon, or bonefish; he applied the same quest for excellence in fly fishing that he taught in the operating room and clinic.

In his retirement, he created detailed, beautiful stained-glass windows and other works of art, which adorn the homes of those he loved. Most importantly, Bernie always said that his greatest accomplishment was his family. My three siblings and I, as well as his 11 grandchildren and three great-grandchildren, were the lifelong beneficiaries of his wisdom, love, and respect, and we will miss him dearly. Family’s memorial

Heart surgeon makes one breakthrough – then another

In Memory of Dr. Robert Douglas Burgess, Class of 7T4