The existential nuclear threat is intensifying

“The war in Ukraine is devastating and disturbing, and the risk of nuclear war is unnerving,” says Dr. Vinay Jindal (Class of 9T5). “Nuclear weapons are being used to intimidate and threaten, and with each new threat I am on edge.

“There are over 12,000 nuclear warheads on the planet and approximately 2,000 are on high alert, ready to launch within minutes. We were never safe, and now with the war in Ukraine, the situation is critical.”

Jindal is a member of International Physicians for the Prevention of Nuclear War (IPPNW). In 1980, at the height of the Cold War, doctors in the United States and Soviet Union came together and formed IPPNW to address the increasing risks of a nuclear confrontation. In 1985, IPPNW won a Nobel Peace Prize. Today, it’s a non-governmental organization of national medical groups representing medical students and health care professionals in 63 countries. Its goal: to abolish nuclear weapons.

The organization states that the only way to ensure that nuclear weapons are never used is to abolish them. “With nuclear weapons, the only number that really matters is zero,” says Jindal, the Past-President of IPPNW Canada.

Banning nuclear weapons under international law represents one step along the path to abolishing them. The United Nations 2017 Treaty on the Prohibition of Nuclear Weapons provides the legal and moral foundation for the eradication of nuclear weapons and makes nuclear weapons illegal. Canada has not signed it.

Despite the treaty, nine countries own nuclear weapons. Russia has the most with approximately 5,977 nuclear warheads. The United States has 5,428 nuclear weapons. Recent research concludes that a full-scale nuclear war between the States and Russia would kill 5 billion people worldwide within two years.

The other countries that possess nuclear weapons are China (350 nuclear warheads), France (290), Great Britain (225), Pakistan (165), India (160), Israel (90), and North Korea (20). Twenty-seven countries, including Canada, endorse the possession and use of nuclear weapons through defensive alliances such as NATO. 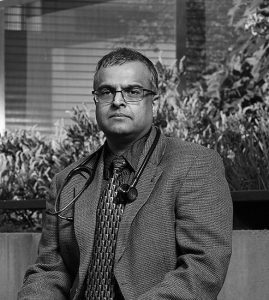 Unfortunately, even countries with impoverished economies consider investing in pricey nuclear weapon programs. While working with Médecins Sans Frontières in Myanmar (formerly Burma), Jindal experienced the challenges of providing care in one of the most underfunded, inequitable health care systems in the world. While on mission, he was shocked to learn that Myanmar was considering developing its own nuclear weapons. This inspired Jindal to continue his work with IPPNW when he returned to Canada.

There’s nothing cheap about nuclear weapons. IPPNW estimates that worldwide, it costs more than $120 billion a year just to maintain and modernize the existing nuclear arsenals. This is money that could be used for health care, education, combating poverty, and disaster relief.

Can you picture it?

It’s difficult to imagine the devastation that today’s nuclear weapons can cause. Our only reference points are the two nuclear bombs that the United States dropped on Japan 77 years ago. The bomb that detonated over Hiroshima caused more than 100,000 deaths and about 75,000 injuries. The bomb dropped on Nagasaki three days later caused approximately 75,000 deaths and 75,000 injuries. Although the images from 1945 are horrific, the devastation pales compared to what a modern nuclear bomb could do; modern nuclear weapons are up to 3,000 times more powerful than those dropped on Japan.

Today, even a limited nuclear war with 100 nuclear weapons anywhere in the world would not only initially kill millions of people, it would disrupt the global climate and agricultural production so severely that over 2 billion people would risk starvation according to an IPPNW report published this year. The average global temperature would drop about 1.3° C, with the most severe environmental impacts occurring at high latitudes in the northern hemisphere, in countries such as Finland, Norway, and Canada.

Jindal believes it’s important to remember the devastating effects that the atomic bombs had on Japan. “The atomic bombings introduced the world to the nuclear age, and their images of suffering and destruction continue to haunt me,” he says.

As Co-Chair of Toronto’s Hiroshima Nagasaki Day Coalition, Jindal works with local peace and community groups to commemorate the lives lost and educate on the unacceptable risks associated with nuclear weapons. The day is marked annually on August 6 or 9, and the group is active throughout the year with local grassroots activism on nuclear disarmament.

“Nuclear weapons are the most horrific, deadly weapons that ever existed,” Jindal continues. “It is not normal to live under the constant threat of nuclear war, and I must be involved and part of a solution.

“Physicians have a unique and trusted voice that can transcend borders and move beyond politics to emphasize the health and humanitarian consequences of nuclear weapons. As a physician, I add my voice to all the voices around the world that reject these weapons of mass destruction and call for abolition.”

The image of Vinay Jindal is from The Peace Builders.

In Memory of Dr. Nancy McKee, Class of 7T0